Well Blow Me Down! 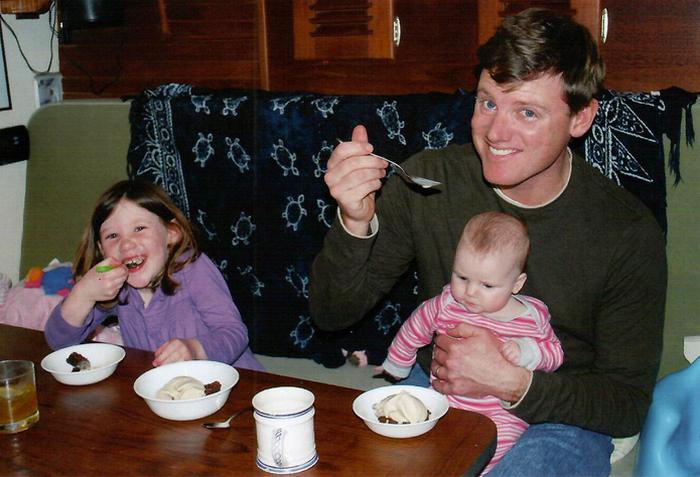 The debate rages on. Which is best: air cooling or water cooling for marine refrigeration systems?

A refrigeration system doesn’t “make cold”, it removes heat from one area and transfers it to another. There is actually no such thing as “cold”, just heat at different temperatures: cold heat, warm heat, hot heat, etc.

In our small marine refrigeration systems, this heat transfer is accomplished using a compressor and a refrigerant to collect heat from inside an insulated space and disperse it somewhere else via the magic of latent heat. The evaporator is the “heat collector” inside the insulated box while the condenser is the component that disperses that heat elsewhere. While the evaporator is specific for the size and configuration for the application, there are choices to be made regarding condensers and the medium they disperse the heat into.

But first, let's watch a demonstration of how a Frigoboat Keel Cooler System works in extreme tropical water conditions. Then we will discuss how this can be.

This bit may be a tad difficult to comprehend, but whereas the heat that the evaporator removes from a fridge or freezer is very cold, that very same heat magically transforms to become very warm at the condenser. That’s why I love this stuff - it’s all quaintly quirky.

Heat transfer can only take place if one item is at a higher temperature than another, and the greater the difference in temperature between them, the more heat will be transferred. Remember that bit.

Heat will travel in one direction only - from a high temperature item or area to one at a lower temperature. So, where should the refrigeration condenser dissipate that heat? To the air inside the boat, or to the water it’s sitting in?

Having an air-cooled condenser is the simple option as it involves simply employing a low-power fan to move air across a tube or series of tubes carrying the refrigerant, with or without fins to increase surface area and efficiency. Consideration must be given to moving the coolest air possible over the condenser, and then not allowing the heated air to return. Air cooling is the least costly solution and the simplest to install, but it’s not necessarily the most efficient option.

Considering that water is over 800 times denser than air and does a better job of transferring heat by a factor of 23, doesn’t it make sense to use water for cooling the condenser rather than air? After all, a boat is sitting in quite a lot of the stuff and it won’t be in short supply any time soon.

However, we should take into account the complication and expense of installing a pump and hosing system, plus the nuisance of clogged strainers, pump breakdowns, pump and water noise, crustaceans encrusting hoses and intakes, etc. Then, one should factor in the power required to run the pump, which is typically considerably more than that required for a fan. But there’s more to it than just the density of the cooling medium.

The fact is, that while sea water will rarely exceed 85°F in typical cruising hang-outs, the air that’s available for cooling purposes on small vessels without air conditioning in southern latitudes can easily surpass 100 deg F. So, air is always at an immediate disadvantage to water for cooling, as the temperature difference between it and the refrigerant is always going to be much narrower than with water, so less heat exchange takes place.

When this difference in condenser temperature is taken into account, water is then seen to transfer heat at a rate around 40 times greater than air.

But there is another factor that comes into play here. The higher the condensing temperature, the higher the pressure of the refrigerant in the condenser. And the higher the pressure of the refrigerant, the harder the compressor must work to compress it, resulting in higher current draw. An air-cooled refrigeration system in elevated ambient conditions will draw more current than a comparable water cooled one for the reasons stated above, not counting the power required for the pump. Even having an over-sized condenser and a huge fan blasting air over it will not be able to negate that fact.

So, what if we could eliminate the water pump and all the associated niggles and hassles and enjoy the benefits and water cooling without a pump. Enter the Frigoboat Keel Cooler.

With the Keel Cooler system, the compressor naturally pumps the refrigerant outside of the boat via a special thru-hull fitting that houses a condensing tube. Here it is cooled and condensed before being returned back inside the boat. So, it’s a water-cooled system that enjoys the same high level of efficiency as a pumped-water system, but without the pump and its accompanying drawbacks, not least of which is the pump’s power draw. No Pump – No Fan – No noise!

The Keel Cooler makes further gains over its rivals by being able to utilize the automatic compressor speed feature of the Merlin II Smart Speed Control. This will run the compressor at the slowest speed possible for the longest time (within limits), in order to engage the highest possible Coefficient Of Performance (COP) hence maximum possible efficiency. In contrast, a pumped-water system should be run at maximum compressor speed only, so with the lowest possible efficiency, in order to keep pump run times to a minimum. Any gains in efficiency realized by running the compressor long and slow would be negated by the additional power required to run the pump. Also, the longer the pump runs the more the chance of a clogged strainer and the greater the wear and tear on the pump. Air-cooled systems are able to utilize the Merlin II, as the fan power consumption is low enough not to take too much away from the gains made at lower compressor speeds.

Many customers seem initially wary of a Frigoboat Keel Cooler’s capability to do the job in elevated water temperatures considering the small physical size. This is a natural concern, but considering the earlier statement that “water is over 800 times denser than air and does a better job of transferring heat by a factor of 23”, it can be seen that the actual condenser itself need only be very small compared to those seen on air-cooled systems.

We could, if it were necessary, have made the Keel Cooler bigger “just to be sure”, but then there would inevitably be problems when working in very cold and freezing water should you be so unfortunate or inept to have strayed into penguin territory.

Still dubious? Then take a look again at the video of our demonstration showing a Keel Cooler in 100°F degree water keeping a wine cooler (1” max insulation) at below 10°F degrees while drawing only 4 amps at 13.6 Volts.

So, if we are to have a super-efficient refrigeration system we should choose one with a condenser that dissipates the heat from the evaporator in a way that is the most efficient and that uses the least amount of power to do so.