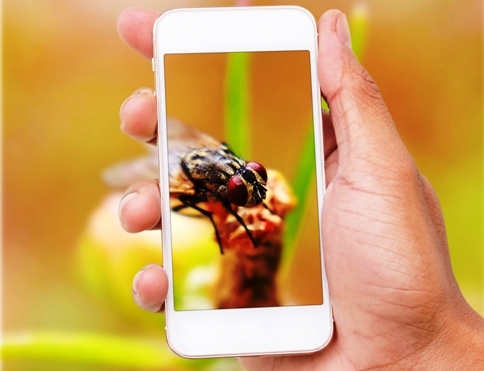 You can’t seem to be able to get away from it these days; politicians throwing out what may or may not be real facts in response to questions. This typically involves bombarding the interviewer with staccato statements that may or may not be correct and that require research before being able to call into question.

What happened to the good old rhetorical question? You know, interviewer asks a question and gets a question back in return. That’s always been a standard stalling technique, but now seems relegated for use when factual fire isn’t working.

I had a sorta close/mildly similar instance last week, but my experience involved phone company employees, not politicians.

I was in the UK when I picked up the bug.

My phone started showing an annoying message, something suspiciously cryptic about “Sense Home”, and when you’re 3,000 miles from home and you get a message like that, it can make one a tad nervous.

Reluctantly, I dismissed the possibility that ET was trying to contact me (that would have been so cool), and no matter what I tried I could not get rid of the darn thing. But then, just as I was mulling over the idea of a foreign entity merrily hacking away at my bits and bobs and bytes, a colleague came to the rescue compliments of Google. No worries! Seems this is a known issue. All you do is diligently go here and there clearing out caches and whatnot, and bingo; bug banished!

Back on home soil, the original message reappeared interspersed with another, more sinister one. While I was quite confident that with Google’s help I could eventually debug the thing myself, I decided that the nice people at the phone store could probably do a much better and quicker job while also giving me hints as to how to avoid future incursions.

But everything looks different in hindsight ...

So it was that I trotted off to the local phone company store. I waited, waited more, waited while I waited, and finally talked to a representative who said he couldn’t do anything and that I’d have to go to the main store in town. Lesson learned.

At the main store (it had cushy benches to sit on), the waiting game was the same but at least I got to talk to people while they tried to sell me cable TV upgrades, etc. Finally a young man sat down next to me and listened to my tale of woe while plonking around diligently on a tablet device.

“Do you know of this bug,” I asked him “and do you have the means to sanitize my phone?”

“Oh yes”, he replied, sounding all concerned and serious, “but there’s a problem”
“But”, say I, “I’ve researched this and it seems to be a well known issue that can be simply fixed by someone with a better knowledge of these things than me” (i.e. anyone from a five year old to a millennial).

“The problem” he says, with a mix of disbelief and dismay, “is that I was going to get you a new phone, but it says here that you don’t have insurance”.

“I fell for that game last time around” I said.”I lost my Blackberry, which was insured, and got a crappy remanufactured item as a replacement that had annoyingly squeaky buttons”. (Actually I didn’t technically lose that phone, as I know exactly where it is. It’s at the bottom of Annapolis harbor by the second mooring bouy on the left, but it would be difficult to recover, and Blackberry is so uncool nowadays anyway.)

The young man agreed that the phone company does indeed issue remanufactured phones as insurance replacements, but then he changed tactics and started talking all doom and gloom regarding my plight.

“There’ll be no way to get rid of that bug. It will have attached itself to things in the software and you’ll never get rid of it” he says.
“So,” I say, “what you’re saying that there is no permanent fix and that the only option I have is for me to purchase a new phone?”
“Yes” he says. I said I respectfully disagree while attempting to look him in the eye, but he was too engrossed in his tablet thingy, maybe texting his mum, so I took my leave.

By the end of the day, with much guidance from Google-land, and having diddled my way around areas of my phone that I didn’t even know existed, I’d found the bug and (hopefully) well and truly squished it. Oh boy, did that ever make me feel good!

Now that experience exposed to me what appears to be a good sales model.

Ensure the majority of your customers insure their purchases, and then once you have built up a nice pile of returned and refurbished products there is no need for your staff to have any real technical skills. All they need do is check that a wayward and misbehaving product is insured and then proclaim; “I have great news for you. I can get you up and running again with a replacement in a jiffy!”. And if the product isn’t insured, then they get to sell the unsuspecting customer a spiffy new one.

After all, you did go to the store for the best advice and expert help didn’t you, so why would you question their greater wisdom?

I pondered recently whether that sort of model would work for Coastal Climate Control’s technical support? Don’t worry, I’ve looked into it thoroughly and can see no way we can use it. More’s the pity, as it would make life so much easier for us!

Instead, we’ll carry on trying to help each customer as best we can and help repair, rather than replace, unless absolutely necessary.

And yes, so far the phone is still un-bugged and singing sweetly. It even gets fake news, but then all I need do is go to the phone store for that.