Things ain't what they used to be.

There's a lot of talk of trade and trade agreements in the run-up to the election, but I've heard nothing of how the substantial anti-dumping and anti-competition tariffs applied to Asian solar products are protecting US interests.

Originally applied to just solar cells, these tariffs were expanded last year to also include complete solar panels made in China and Taiwan, and add a whopping 250% or so of duty to the imported price of all but a very few manufacturers of Chinese and Taiwanese panels.

The results of these tariffs are already being seen in the semi-flexible panels, popular in marine applications. Many of these low-cost panels suddenly shot up in price, and several outlets stopped offering them altogether, but the tariffs are not the only reason .....

Most of the low-cost, semi-flexible panels from China appear to be made with back-contact cells; the only manufacturer of these cells is SunPower, who have a patent on the process. Coastal sells both Solara and Solbian panels made with SunPower cells, but the prices are considerably higher than the low cost panels. So what is it that dictates such a high price disparity?

Well, the difference is in the quality of the cells. You see, SunPower invests considerable resources when making each and every one of their back contact cells, and this is even before they can be tested for quality. Once a batch has been tested and graded, there remains a pile of rejects dumped in the corner that just didn't make the grade. These reject cells may have physical defects like cracks, or have failed a hot-spot test, or simply have low power output.

So, rather than SunPower destroying these rejects and eating the cost, they are sold as "Off Spec" cells primarily intended for research and education projects, but it seems a lot of them have ended up in low-cost Asian panels. The sales agreement stipulates that these cells cannot be referred to as SunPower, nor may they be made into panels larger than 100 watts, primarily due to the risk of the faulty cells overheating and causing fires, but those rules seem to have been generally disregarded. And catching fire is exactly what some of these low-cost panels have been doing, burning the canvas they were mounted on in the process.

"Low cost" is a relative term, but when one panel is (or was, thanks to the tariffs) a quarter of the cost of a similar looking, similarly rated competitor, there just has to be a good reason. Solbian and Solara use only genuine, high-grade SunPower cells of over 22.5% efficiency. I know this because we have to obtain COO's (Certificates Of Origin) for the cells and panels to satisfy the US authorities that they are not from China or Taiwan. Each of those high-grade SunPower cells costs Solara and Solbian over $5.00 per cell, whereas the off-spec cells sell for less than $1.00. But how can you tell a high-quality cell from an off-spec cell when outwardly they both look exactly the same, like a genuine Rolex vs. a well-made fake?

One method is to use Electro Luminescence (EL), where current is applied to the panel and the results viewed on a special machine. The examples here show the cracks and defects in the cells of the low-cost panel (left), and the defect-free cells of the Solbian panel on the right. 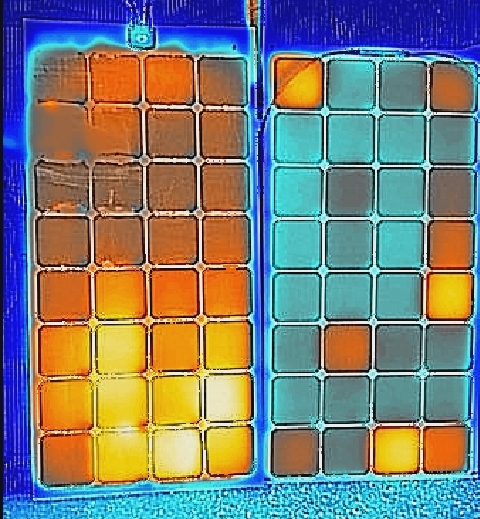 Not having the luxury of a spiffy EL machine (it's on my Christmas list, Santa), I turned to the practicality of an infra-red camera. The infra-red photo at right shows a Solbian 100 watt panel on the left and a low-cost 100 watt panel at right.
Both are short-circuited and both are standing next to each other in full sunlight.

Note how the cells in the Solbian panel show up as much warmer than those in the other panel, indicating that the Solbian panel is capable of producing much more power than the low-cost model, no matter what it's supposed rating indicates.

You pays your money and you makes your choice, but thanks to the tariffs, the price disparity is now, or soon will be, much less of a factor. Making the choice should now be a real no-brainer.