Prepare for those inconvenient power outages, or for the trending living-off-the-grid

We sell a fabulous battery – Firefly’s 2v/4v model, which has all the advantages of their popular Group 31, but in a different format. Here's where I intend to use them in a future project.

With the increasing frequency of heavy storms and threats of power outages, I’ve been reviewing the emergency battery back-up system I have set up in my basement. This currently consists of 8x 185 amp/hr AGM batteries with an Inverter-Charger, plus a mains/generator Transfer Switch with generator plug-in access. There is also a Transfer Box that has six mains/inverter transfer switches with associated breakers and balancing meters which supply six circuits: the fridge, kitchen outlets, sump pump, basement outlets, front room outlets, and the oil-fired furnace. 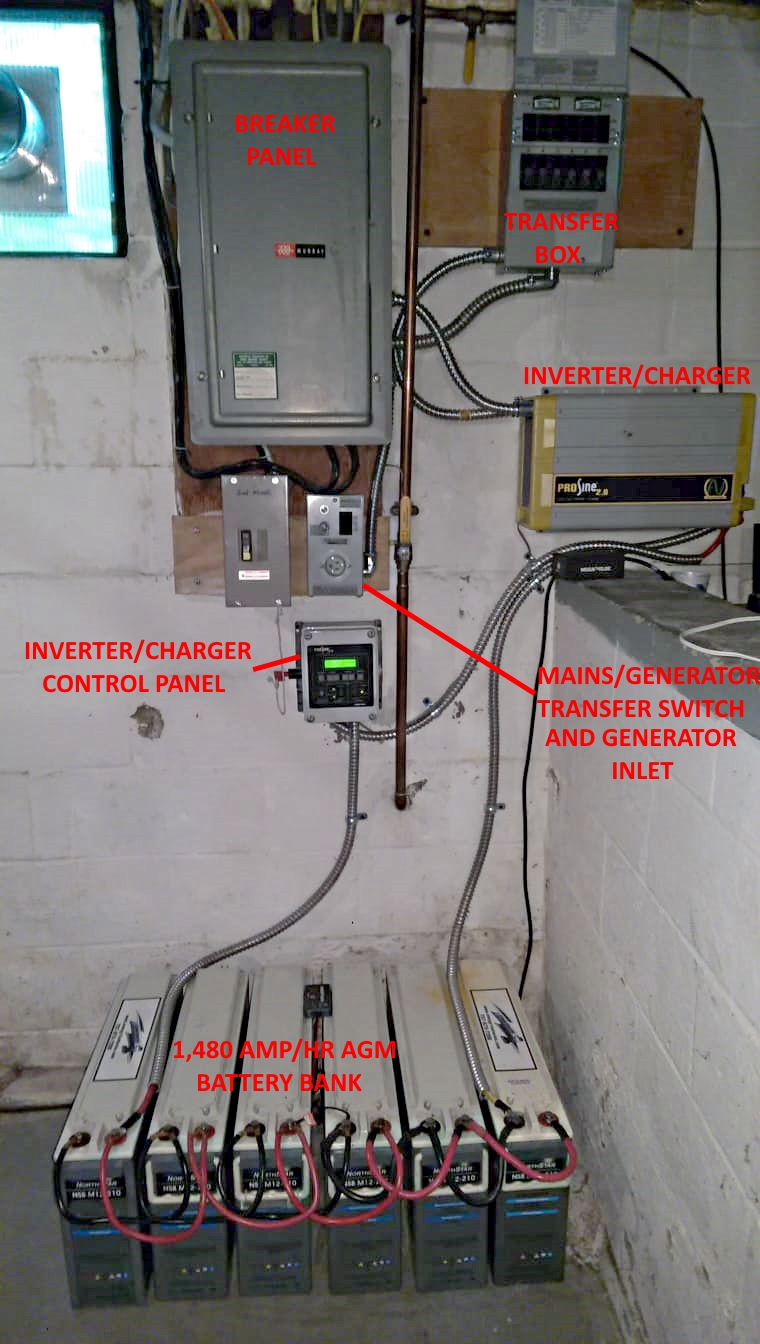 When the mains power goes out, the Inverter-Charger’s internal transfer switch switches the inverter on and then AC power that is produced by the inverter from the battery bank is supplied to those six circuits. This switchover is virtually seamless, and happens within one half cycle of the 60 Hz cycle, so it is typically unnoticeable. When mains power is restored, the Inverter-Charger will synchronize the two alternating cycles and then the internal transfer switch will drop out leaving the circuits back on the restored mains power. At that point, the 100 amp charger of the Inverter-Charger will ramp up and start putting the charge back in the battery bank that had been used to produce the AC power during the power outage.

If the power outage goes on for more than a few hours, I can plug in a portable generator at the mains/generator Transfer Switch and set the switch to Generator. When the Inverter/Charger sees the AC power from the generator it will deactivate its internal transfer switch and enable the charger, leaving the generator to deliver power to those six chosen AC circuits plus powering the charger to charge the batteries. When mains power is restored, a quick flip of the Transfer Switch back to Mains restores everything back to normal.

Dependent on usage, the existing battery bank is good enough for upwards of a 24 hour day, but these are all salvaged batteries that were reported to be “tired” by customers who had bought replacements. If it’s a winter event that cuts the power, the furnace injector pump plus the blower can sap these batteries quickly. I’m wary of taking them down past about 40% Depth Of Discharge (DOD), as their performance drops off dramatically after that and can lead to nasty surprises if I don’t keep an eye on things. Besides, they then take forever to fully recharge, so the lower the DOD the better.

So, lately I have been considering replacing those old tired cast-off batteries with some Firefly 2v/4v models. These can be configured to be either 4 volt at 450 amp/hrs, or 2v at 900 amp/hrs, and my plan would be for three of them in 4v configuration to be wired in series to make a 450 amp/hr 12v bank, plus another three in parallel to those to make a 900 amp/hr bank total. Configuring batteries in this series/parallel fashion provides for the removal of one battery in the case of a failure without losing the whole bank, as would be the case if we were to use six of them wired in series set up as 2v items.

Because Firefly batteries can be taken down to a lower DOD than most batteries without detrimental effect, and considering the fact that they have been proved to charge faster than other AGM’s, I should be able to safely use 80% of the capacity; i.e. 720 amp/hrs, compared to less than 600 amp/hrs that I budget for now. The resulting bank would take up about 2/3 of the existing footprint and be just a few inches taller, so there is some space-saving to be had also.

I’m all charged up at the thought of making this upgrade, and will report on the results in a future blog, but I’m not looking forward to lugging a load of lead up and down the basement stairs. I’ll be looking for a rufty-tufty muscle-bound youngster to help me with that!