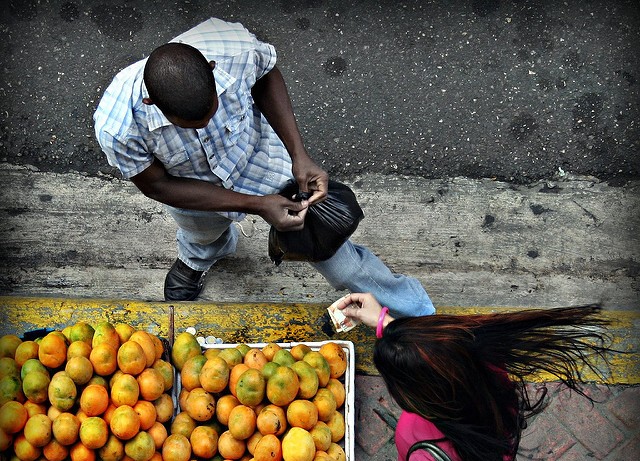 Walking through the gaudy and gay Miami Bayside entertainment area during the Miami Strictly Sail show last week, whilst dodging obstacles such as parrot-wielding hawkers and perfume swatch pushers, I spotted a sign promoting a bar/restaurant called “Mangoes”.
This, reinforced recently by the sight of them on a supermarket shelf, reminded me that if I ever go back to St. Lucia, I have been promised free mangoes there for life.

How that all came about makes for quite a tale.

Back in the mid/late 80’s I was skippering a very nice yacht in St. Lucia, where the boat’s owner had a magnificent house overlooking The Pitons. My wife and I had been cruising up and down the Windward Islands all winter ferrying the owner and his friends and family around, but now it was time to head north to Antigua for race week before heading across the pond and back to Europe.
After a succession of giddy and hazy farewells, we were finally leaving the island, checking out of Rodney Bay on a typically bright and breezy day and heading off to Martinique to stock up on some French essentials along the way. It’s not a long passage, but it’s typically quite blustery and lumpy out there due to the prevailing easterly winds that strengthen as they funnel into the gap between the islands and kick up a nasty chop.
I had recently taken on a local lad named Sunshine as crew to help during race week and the ocean crossing, and the three of us were in high spirits as we cast off and headed north. We must have been delayed by some lengthy farewells that afternoon, as it appeared we were the last boat to leave heading north and we’d have to get a move on and not dawdle too much on the way over.
At some point, with the three of us in the cockpit giddily making plans while cracking along on a close reach, I headed to the bow to check things out as I thought I may have spotted something ahead. After a good look around and with nothing unusual having being seen, I was soon back in the cockpit assuming it must have been my imagination. But then a few minutes later, a peculiar sight came into view just off to our lee.
What initially caught my eye was a dull red object seemingly attached to a pole, but then I noticed that the pole (actually an oar) was being held aloft by one of a pair of figures immersed in water and sitting on or in something that was barely afloat. I could see the desperation in their big white eyes, and although their mouths were opening and closing, they were just too weak to be able to utter any useful cries for help against the noises of the wind and waves. Once they’d seen that we’d spotted them and had signaled our intentions, they both lowered their heads to their chests, as if even the act of simply holding their heads up had been an enormous effort. 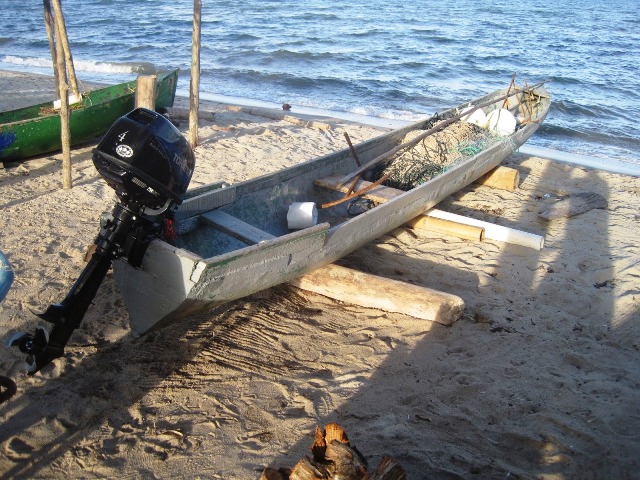 We quickly lowered the sails and motored back to them for a closer look, and what we saw was quite a shock. These were obviously inshore fishermen who were sitting in what remained of a dug-out canoe that had been overcome in choppy conditions and had drifted out into deeper and more boisterous waters.
We later learned that once they were swamped they ditched the outboard motor and all other unnecessary bits and bobs hoping that the wooden shell would provide enough flotation to support them. This it did ... just. I could see the rim of the shell, which islanders literally hollow out from a solid log, but it was otherwise completely swamped. These poor souls had been sitting in cold sea water up to their nether regions since the sea had got the better of them the previous afternoon; through the cold of night and the searing daytime sun.

The easy bit.
It was a simple job getting back to them, but getting them on board proved extremely difficult in the nasty swell and in their weakened state. Finally we had them in the cockpit and wrapped in blankets. Shivering uncontrollably, and muttering weak staccato “thank-you’s” through chattering teeth, I could see tears of what must have been utter relief sliding down their ghostly cheeks. The locals from these islands normally have a lovely rich, dark skin color, but these two were a deathly shade of gray, and their faces were noticeably wrinkled from their extended salt water dousing.
My wife soon managed to get them down below where, despite bashful protests, she successfully got them to remove every shred of sopping clothing while she searched my gear for suitable dry replacements. Notably, only one pair of underpants was recovered. The other had served as the red flag that had no doubt saved their lives.

Now for the fun bit.
Now that the adrenaline rush had subsided and our two guests were beginning to recover, there remained the little conundrum of what to do with them. They were really nice chaps, and although they would have made great crew and we would always have had fresh fish, they really needed to be getting back to their families.
A call to the St. Lucian Coast Guard instigated a lot of confusion and incredulous responses due to the fact that, although they were out there searching for missing persons, they were looking for bodies, not survivors. This pair had been reported missing the day before, but then presumed to be dead with what would have been their second night at sea fast approaching. Apparently, this was a not uncommon occurrence in these waters, with victims usually being taken swiftly out across the Caribbean by the prevailing winds and currents, never to be seen again.
I explained to the coasties that the simplest thing would be for us to take these two to Martinique and have the authorities organize their return, but apparently that was much too simple a solution. No, instead, the Coast Guard were insistent that we return them to St. Lucia where a civic reception would be held in our honor. We thanked them, but politely declined the invitation, although undoubtedly it would have been one heck of a party!
That left the only other feasible option; i.e. that the fearless St. Lucian Coast Guard would retrieve them from us at sea and then we’d say our farewells and be on our way to Martinique, hopefully before dusk.
After much confusion, and with them having gone to every single vessel in the area but us, the Coast Guard finally found their target and prepared to come alongside. That was their plan, not mine. When I saw this towering hulk of metal getting closer and rolling crazily in the swell, there was just no way I was going to allow such a potential fiberglass crusher anywhere near my employer’s beautiful yacht. Then I spotted an inflatable on their aft deck and assumed this was going to be the answer, but ironically they, the St. Lucian Coast Guard, said it was too rough to deploy it. Go figure ...
Thanks to the lengthy delay in us being located, the two formally weak and huddled masses had now transformed into something resembling normal human beings. They were happily sipping hot soup in the cockpit while recalling their horrendous experience and gibbering on about families, life, God, and probably the one that got away.
But all good things must come to an end, and the plan was made that, once they felt ready, they and Sunshine would get into the little inflatable we’d had in tow while I let it drift astern on a long tether so the transfer could take place safely. I felt a little bit guilty at this, as it seemed I was subjecting three unsuspecting persons to being guinea pigs in a real-life but seemingly make-it-up-as-we-go-along Coast Guard drill. Our two island fishermen, now looking like very odd yachties indeed decked out as they were in my ill-fitting cast-offs, understandably had some reservations about getting back into a heaving little dinghy, but eventually they did. Thankfully it all worked out well, but only after some scary maneuvering by the throttle-jockey helming the hulk. Maybe he actually did only have idle and full throttle available ...
The last thing I recall those two lucky souls saying as we all hugged, cried, and said our good-byes was that if we were ever to return to St. Lucia we would be sure to have mangoes for life.
So that’s my prize, my Oscar. Mangoes for life. It’s a prize I will probably never collect, but it can never be taken away from me either.
One thing’s for sure: If ever I go sailing around St. Lucia again, I’ll be sure to wear red underpants.