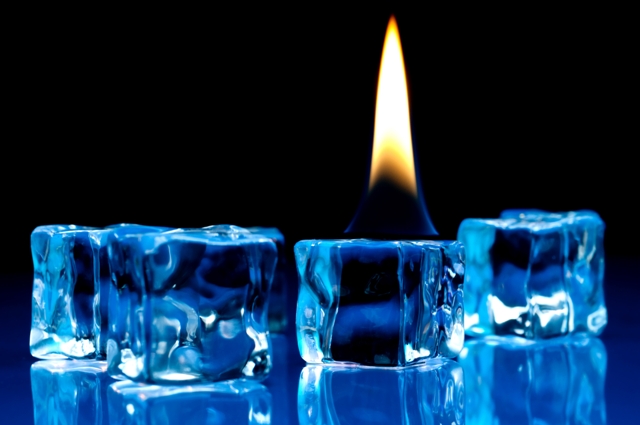 If you didn't know it already, the term Btu stands for "British thermal unit". I don't know what gave the Brit's the right to have their own thermal unit, but let's hope they don't ask for it back any time soon, as it is so much easier to comprehend than the metric equivalents using Joules, Calories, etc.

It's common to see the cooling and heating capacity of air conditioners, refrigerators, furnaces, etc., being shown by their Btu ratings or Tons (1 Ton of refrigeration = 12,000 Btu), but what exactly is this Btu? What does it look like? And does The Queen have one?

Simply put, one Btu is the amount of heat required to be added to, or extracted from, one pound of pure water in order to raise or lower its temperature by one degree Fahrenheit. This is about the same amount of heat as given off by a match that's used to light a fire.

So, if we have one pound of water at 100°F and add 40 Btu to it, its temperature will rise to 140°F. If we removed 40 Btu's from our one pound of water, its temperature will drop to 60°F. If you are all following this so far it's not too surprising, as what I've described above is known as "Sensible Heat", and, as you are already reading this, then obviously you are all very sensible people!

Now, if we keep on adding Btu's to our one pound of water, it will keep rising in temperature at a linear rate of 1°F for each Btu added until it starts to boil, which at sea level will be 212°F (100°C).

That one pound of water must absorb 970 Btu's before it all turns to steam, and will stay at 212°F during the process. That's one match required to raise the temperature by one degree, and then almost 1,000 matches to boil off the water while not raising the temperature.

Obviously this is not Sensible Heat, and logically we would expect it to be called Silly Heat, but it is actually given the more mundane title of Latent Heat.

In this case it is the Latent Heat of Vaporization of Water, which simple math defines as being 970 Btu's per pound (or 2,260 joules or 540 calories per gram).

The above is a somewhat simplified version of real life, as some vapor will always be evaporating from the water as we heat it up, and more so at higher temperatures. So there won't be exactly one pound of water in the pot when we reach boiling point, and we'll have to be adding a smidge of latent heat along with the sensible heat to get there.

This latent heat phenomenon pops up in some surprising places;

• Sweat - "Men sweat, women perspire, and ladies glow" according to Victorian etiquette manuals. We get hot, our skin oozes moisture, and as the moisture evaporates it cools the skin using latent heat. One supposes that Victorian ladies had been equipped with glow-plugs.

• Cooking - Processed meat products typically have some water added, for whatever reason, and vegetables contain lots of moisture. In the pan, many meats and vegetables cook slowly at first as the water evaporates away in clouds of steam using much of the applied heat to do so and keeping temperatures low. And then, without warning and while your back is turned, the water has all evaporated, the temperature in the pan rises rapidly, and the meal is all burnt. Next time you burn the dinner blame it on LHS (Latent Heat Syndrome).

• Firefighting - A building is on fire and the fire fighters pour water on it. Lots of water. The water does not so much smother the fire, it's the massive amount of latent heat required to turn that water into steam that sucks heat away from the surroundings and reduces the overall temperature below the flash-point of the structure. 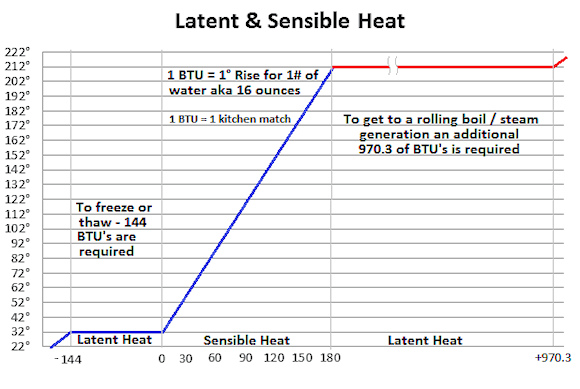 • Air conditioning in city buildings - If we reverse the process described above and cool steam down so that it condenses back into water, it will suck huge amounts of heat energy from whatever it is that is cooling it. And if that "whatever" happens to be liquid circulating through a building's chiller system, then we can use the same steam for cooling in Summer as is used to heat the building in Winter.

• Refrigeration - Yes, refrigeration. So far we have only considered water, but what about other liquids or chemicals? Refrigerants are chemicals that boil at very low temperatures, and in a typical marine refrigerator the refrigerant will be boiling inside the evaporator that is inside the insulated box at close to 0°F. That changing of state from liquid to vapor requires large amounts of latent heat which is sucked out of the air in the box, cooling the contents as a result.

Now let’s see what happens at the other end of the scale.

Removing heat from our one pound of water one Btu at a time will produce a linear result until the temperature of the water reaches 32°F (0°C). At the freezing point of water, it will require 144 Btu’s of latent heat to be removed in order to turn all the water into ice without any further drop in temperature, after which the ice will be sub-cooled.

So best be prepared for a large power drain the next time you task your icemaker with coughing up copious amounts of ice for the sundowners, or when you attempt to freeze that freshly caught mega-tuna in your boat’s freezer.