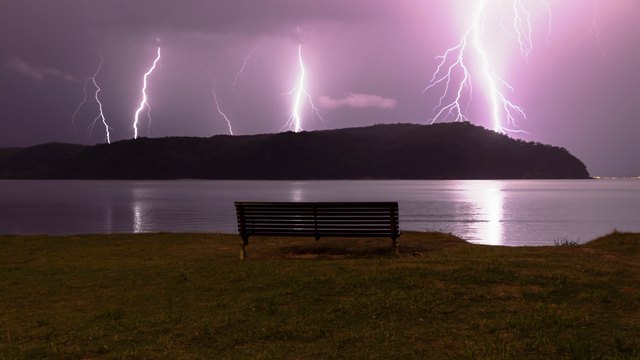 Lightning, the moving magnetic north pole, and your compass

We have just resolved the first known instance of a Solara Power M solar panel failure out of the 2,200+ sold by Coastal Climate Control to date. I’m sure there are some out there that will have suffered accidental damage, but this failure was not from abuse, misuse, or a manufacturing defect, but from an act of a god. The Greek god Zeus, to be exact, who apparently sent a lightning bolt earthwards, rendering this panel toast.

Outwardly, the only sign of anything untoward was a small blister in the top foil, but an autopsy revealed a connecting track beneath the blister reduced to cinders, and two tiny zap holes in the aluminum backing plate. Where the lightning went from there and what other damage it caused, if any, is unknown.

Lightning does funny things on boats. I’m talking here not so much of direct hits, which are pretty much terminal events and decidedly unfunny, but rather proximity strikes, of which I believe the Solara panel was a recipient. Proximity strikes are the side effects resulting from a close hit, i.e. lightning striking another boat or object nearby, and the effects can be very subtle and difficult to detect.

The complete failure of an electronic-style breaker panel on one sailboat was explained when someone noticed that the Windex on top of the mast had lost its ears, which were later found on neighboring boats. (Power boaters and land lubbers may need to Google “Windex”, and no, it’s not a glass cleaner).

Another vessel I saw was peppered with numerous pin-holes through the hull along the waterline, no other damage, just the pin-holes, and the most bothersome effect materialized on a boat I chartered in England to take the Yachtmaster Offshore practical exam.

I’d arranged, along with another student, to spend time ahead of the day-long practical exam on the boat, getting to know the vessel and its instruments, and a good job too as it turned out. The owner explained that his boat had been struck by lightning previously and was exhibiting some strange little anomalies. One concerned the needle on the fuel gauge that would suddenly start pinging around without warning. This was non-consequential other than being a mesmerizing distraction, but the fact that the engine was now heavily magnetized had far-reaching results.

CDMVT. If you recognize that series of letters you’re probably a serious old salt with many a sea mile under your seaweed-encrusted webbed feet, or a nautical nerd. British trainee navigators, especially chocolate lovers, remember it as: Cadbury’s Dairy Milk Very Tasty. For others, let me offer a quick, and I hope simple, explanation.

When navigating by compass there are two corrections to apply before a bearing taken from a compass is transferred to a chart:

Variation (V) is the correction required to address the fact that the magnetic north pole, as indicated by the compass, is not actually where the physical North Pole is. (The latter is easy to identify this time of year due to the frequent comings and goings of a reindeer-powered sleigh containing a portly chap in red robes).
Deviation (D) is the correction applied to address local on-board magnetic anomalies that affect a fixed compass that one takes bearings from. Each fixed compass will have a unique chart showing the direction and magnitude of the correction required for each point of the compass.

So, we start with a bearing we take from the compass (C), then we add or subtract Deviation (D) to derive a Magnetic (M) reading. Next we apply Variation (V), which is shown on the chart, and we end up with a True (T) bearing that we can apply to the paper chart by utilizing the compass rose printed on it, hence CDMVT. In practice, the deviation is typically all but ignored, and the magnetic compass rose on the chart is used instead of applying variation, but that technique won’t get high marks in any exam.

Now, imagine you are being tested on your plotting skills and having to go through the whole rigmarole of variation, deviation, etc, when the lightning-induced magnetization of the engine has resulted in a whopping 30° of deviation, as was the case on my chartered boat. Deviation is typically just one or two degrees either way, so this was a real test, which I’m happy to report ended well. I got the ticket OK, and then promptly reverted to electronic gizmo’s for navigation. I went on to bag the Yachtmaster Ocean ticket, but wouldn’t know what to do with a sextant nowadays if it were to fly up my nose, other than to hastily remove it. 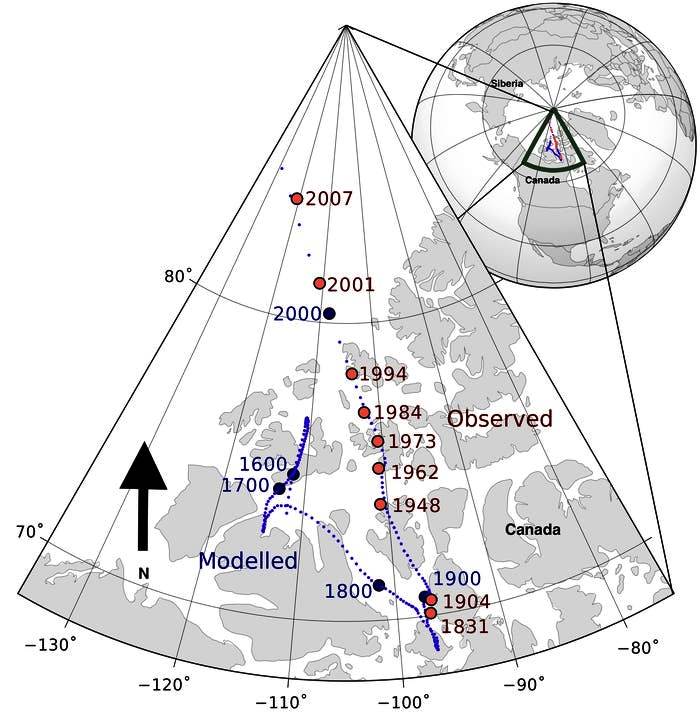 Those out there relying on compass bearings might want to pay attention to recent updates on magnetic variation. It seems that magnetic north, after wandering slowly around the Canadian Arctic since records began in the 16th century, has suddenly picked up its skirts and headed off towards Siberia at the rate of 50km a year. It has now crossed the Greenwich Meridian, and experts predict it will continue on its current trajectory for about 500km.

The strength of the Earth’s magnetic field is also reported to be weakening, and there is talk that the field could even reverse its polarity at some point, which geological records suggest last happened 780 millenniums ago. This phenomenon happens apparently every 500,000 years, so we are statistically overdue for a polarity flip, but I wouldn’t lose sleep over it. However, it would lead to nasty stuff like communication systems and electrical grids crashing due to the effects of increased solar and cosmic radiation, not to mention the confusion if one were taking a navigation exam at the time.

The earth’s magnetic field is supposedly created by molten iron swishing around in the earth’s core, and I say “supposedly”, because as far as I know no one’s actually been down there to check it out. Strangely, the magnetic South Pole is very stable, with none of the wanderlust of its northern counterpart, but maybe that will change if the poles invert and Santa has to pack up the workshop and move himself and his elves down south.

Barring the wrath of Zeus and other quirks of fate, the crew at Coastal wish all of our friends, customers and suppliers a happy holiday season, and thanks for listening in 2019.