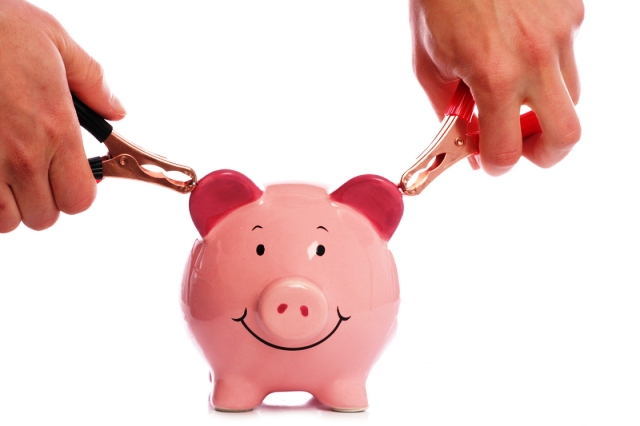 The simplest configuration (simple being a relative term, and I have some very simple relatives) would be utilizing several of the largest 12v batteries wired in parallel, which increases the overall A/hr capacity without raising the voltage. A good marine 8D AGM battery will be around 250 A/hr, so maybe three of these wired in parallel will do it for our customer at 750 A/hr total. They weigh in at a whopping 150 lbs each and are bulky and awkward to maneuver in tight corners, so if it were me I’d find some willing young muscles to do the installation in order to avoid strained muscles and broken toes.

Alternatively, we could use the “suitcase” style AGM’s originally developed for the telecoms market. I used to refer to them as “flat” batteries due to their shape, but it was a spectacularly unsuccessful sales pitch. A good example is the M215B Blue Plus from SPS (Northstar) that is rated at 215 A/hr. Four of them wired in parallel would yield 860 A/hr, and although they are taller than an 8D, they take up less than half the floor space; 440 sq in versus 900 sq in for the three 8D’s. These can also be installed on their side for a total height of only 5”, but you’d need 1,150 sq in to accommodate them all in that orientation. Alternatively, you could install some upright and some laid flat.

Now, this customer of ours specified Firefly Carbon Foam batteries, which in the 12v format are only currently available in a Group 31 size. They have 110 A/hr capacity and so seven (770 A/hr) or eight (880 A/hr) of them would be required wired in parallel. But as these Firefly batteries can be safely discharged to a deeper level than standard batteries and still have superior cycle life, and also considering that they recharge faster than conventional batteries, a smaller battery bank could possibly be utilized to achieve the required results.

Cell packs are available in 2v, 4v, and 6v, and in a variety of A/hr capacities. These are wired together in a series chain, which multiplies the voltage without increasing the A/hr capacity. For our projected 800 A/hr bank, the 6v models are too small in capacity and are more suited to 24v, 36v or 48v systems, so we’d be looking at using three of the 4v cell packs or six of the 2v’s. In this format, the products are typically taller than most “normal” batteries, and this may present some installation challenges, although AGM versions can be laid on their sides without detriment.

As our customer has expressed a desire for Firefly batteries we would propose using their 2v/4v L16+ model. These can be configured on the terminals as either a single 4v cell with 450 A/hr capacity or a 2v cell with 900 A/hr, so six of these configured for 2v and wired in series would make a very nice installation with plenty of capacity. In this configuration, the cell groups would take up 430 sq in floor space with a height of just over 17” if all were situated vertically. The Firefly carbon-foam batteries are essentially the same VRLA (Valve Regulated Lead Acid) construction as their “standard” AGM cousins, so once again all or some of these low voltage cell packs could be installed on their side if their height could not be easily accommodated.

It has been a common cry for many years now that wiring batteries in parallel is a dangerous idea and is not to be recommended. Why? Well, it is said that if one battery were to suffer a short circuit internally it could drag the other batteries down with it and that could lead to a dangerous situation.

This I agree with, but really only if we’re talking about the old-style flooded batteries. When you have lead plates suspended in a bath of liquid acid that’s sloshing around, there is always the possibility of a short circuit due to damage from vibration or the plates bending and warping from misuse, etc. But in an AGM battery, the plates are squished together with mats separating them and insulating them from one another, so there is very little probability of a short circuit.

If there were an open circuit in any type of battery in a parallel wired system, that particular battery would simply become ineffective. The result would be simply that the overall capacity of the bank would be reduced without loss of service or potential for damage.

Individual cell packs or batteries in series wired systems will not automatically balance themselves to the same voltage, as is the case in a parallel wired system. If an unbalance between cell groups were to occur, through misuse or an internal failure, it could lead to a potentially dangerous situation.

Unfortunately, I know of no battery balancers available for connecting between cell groups of 2v, 4v, or 6v like there are for 12v batteries, so the best approach would be to monitor individual cell group voltages regularly to spot any variances.

Both parallel and series wired battery systems offer great flexibility in installation as they both consist of a number of individual items connected together by cables. The individual batteries or cell groups can be spread around and even be in different areas or compartments and do not necessarily require to be in close proximity to one another. Of course, close coupling is preferable in order to minimize cabling and volt drop between items as well as to keep temperatures equal and other factors, but it is not essential.

There is far more choice and flexibility available in 12v batteries than in the low voltage/large capacity cell groups, and on a boat installation that may swing things in the direction of a parallel wired system.

The recent experience of a customer vividly highlighted one particular benefit of a parallel wired system. This involved a battery bank of three 12v batteries wired in parallel, and by some misfortune/mistake/act of God they were discharged completely, as in dead, stone dead, zero volts. Miraculously, two of the three were resuscitated and went on to tell the tale, but the third was lost forever and was disconnected from the other two batteries and readied for burial.

This left the owner still with a working 12v battery system albeit at 2/3 original capacity, and although common sense tells us that one shouldn’t mix new and old batteries, a replacement was installed and life goes on. Now, if that had been a series wired system and one cell group had failed or had not come back to life, there would be no 12v power available until a replacement cell group had been installed. Advantage parallel wired system again.

What we can derive from all the above is that there are really no serious draw-backs with either a series or parallel wired battery system as long as good quality batteries or cell groups are utilized. But a parallel wired system does have the advantages of:

1) greater choice of capacity and dimensional size of the individual components;
2) no unbalancing issues; and
3) an open circuit failure and/or removal of one battery will not render the entire bank useless.

I would recommend to our customer that he consider a parallel wired system of six Firefly Gp 31 12v batteries for a bank of 660 A/hr. Although the original brief was for 800 A/hr, for the reasons stated earlier a smaller capacity bank of Firefly batteries will most probably give excellent results and still have a longer cycle life than regular AGM’s. But then if more capacity is required in future, adding another matching battery to the bank will be a fairly simple task as long as space permits.

Oh, but you can’t add capacity that simply to a series wired system now can you, so that looks like yet another plus for the parallel protagonists.