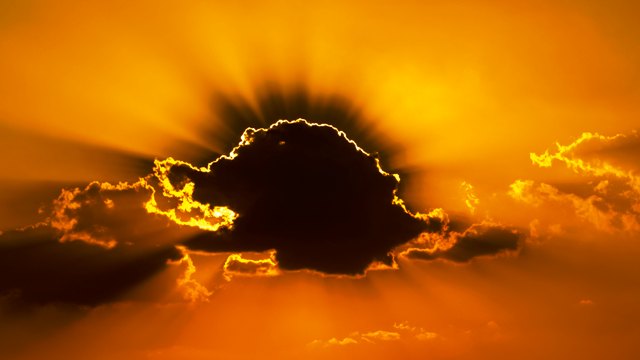 I think we all get the idea of what a “By-Pass” is, whether it’s a by-pass road to divert traffic around a city, or a heart by-pass operation to channel blood supply around a restricted artery. So what does a By-Pass Diode do in a solar panel? Obviously it must divert something around something, but what, why, and how?

Right away, let’s quell the myth that By-Pass Diodes are there primarily to improve performance under shaded conditions.

Although some specialized large panels may incorporate a number of By-Pass Diodes in an attempt to mitigate some effects of total shading, that is not their primary purpose. They are there as a safety device to prevent heat damage to cells if those cells become completely covered by something opaque, therefore blocking all light getting to the cell or a group of cells. Under totally shaded conditions, silicon solar cells will actually absorb power from the other cells on the same circuit and, if the power is high enough, the cell can burn through the substrate and even cause a fire.

A diode in its basic form is essentially a one-way valve for electrical current. We connect a diode across a group of cells in a solar panel to form a by-pass path around those cells, and arrange it so that in normal operation the by-pass path is blocked.

By limiting the number of cells affected by the shading in this way, we can limit the power absorption in the shaded cell(s) to ensure that it is not at a high enough level to cause excessive heating and cell burning. 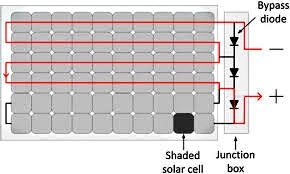 The illustration above shows a solar panel with three By-Pass Diodes. The shaded cell is blocking the chain and restricting the output at the positive connection, causing the associated By-Pass Diode to “switch on” and allow the current to by-pass the shaded section.

The marine solar panels we offer utilize two By-Pass Diodes for each panel from 50 watts up to 160 watts (the Panasonic residential/commercial 330 watt panel has four). Effectively, each panel is electrically split into two halves, with a By-Pass Diode protecting each half. That way, if any of the cells get completely covered, the By-Pass Diode protecting that half of the panel “switches” itself on and isolates that half of the panel, leaving the other half unaffected. Note that the cells will still produce voltage even with very heavy shading, although current may be non-existent. It is only when light to the cell is completely blocked, i.e. something laying on the surface of the panel, that the voltage is reduced to zero, and that is when the By-Pass Diodes come into play.

Solara Power M and Standard series panels have By-Pass Diodes, referred to as “Hot-Spot Preventers”, mounted in an external Diode Box. This must be mounted in a dry location somewhere between the panel and the solar controller, and can be easily replaced if the diodes fail due to lightning damage. The Solara Diode Box also contains a Blocking Diode that can be utilized in a parallel-wired installation.

Solbian flexible panels have the two By-Pass Diodes embedded into the surface of the panel itself. There are some lower-cost flexible panels from other manufacturers that I’ve seen that appear to have only a single By-Pass Diode across the entire panel, and that may account for some of the burnt-cell damage we have seen with some of those panels.