A Walk on the Wild Side

“I wandered lonely as a cloud” mused the wordsmith Wordsworth circa 1800.

“I gotta ramble on” screeched Robert Plant of Led Zeppelin in 1969.

“How was I supposed to know I was walking in the bike lane?” uttered this author last week after a near miss with a speeding bicycle in a dark and damp Amsterdam.

These legs of mine have done a lot of wandering and rambling lately, with the rest of me going along for the ride. First it was tramping the boardwalks and docks in the Ft Lauderdale International Boat Show, mostly stumbling along behind shuffling gawkers guessing how much this mega-yacht costs, or wondering who might own that one. That, combined with pacing the booth day after day, makes for a tiring time, but that was followed by three days back in the office before popping over to the UK for a weekend break prior to heading to Amsterdam.

England in November can be a tad cold and claggy, but walking in the beautiful countryside at this time of year proved be a pleasant experience, having donned suitable attire and being prepared for a drenching without warning. However, it was soon evident that my training schedule of brisk daily walks on a machine in the basement at home, with TV clicker in one hand and remote for the fan in the other, was incomplete preparation for the real thing. Setting the machine to varying speeds and inclines may indeed prepare one for an uphill slog, but it leaves other muscles completely unprepared for the downhill bit. Although there was much suffering in silence from aching shins and calves, relief was never too far away in the form of a pint in front of the fire in the pub at the end of the trail.

And silence there was for the most part, and it did feel like wandering lonely as a cloud, because apart from an odd jackdaw, crow, or pigeon, there were few other birds around for company. Even in the gardens, the humble and ubiquitous house sparrow is now sadly a rare sight, being on the endangered species list in the UK and numbers dwindling fast in North America. Apparently, it’s all down to the use of chemicals, primarily by farmers using them for pest control.

It seems that the chemicals have been doing a great job of killing off bugs and insects, but bird populations are suffering as a result. Sparrows, for example, are primarily seed and nut eaters, but baby sparrows in the nest need bugs for nutrition and for their water content; without bugs they simply don’t survive. Just think, when was the last time you had a problem seeing out of a car windshield splattered with a kaleidoscope of squashed bug juices? Do gas stations even still have squeegees available for de-bugging windshields? And to think that sparrows were first introduced into North America in an effort to control caterpillars that were decimating lime trees in New York. There’s a warning here, methinks …

Walking in Amsterdam has its own delights and dangers. Traipsing around the massive Marine Equipment Trade Show (METS) from vendor to vendor and between the 12+ halls of exhibits takes all of the three days available, but the rewards are significant. There’s so much to see, with so much equipment and so many manufacturers unknown to the USA, many of whom are leading the way in their fields. 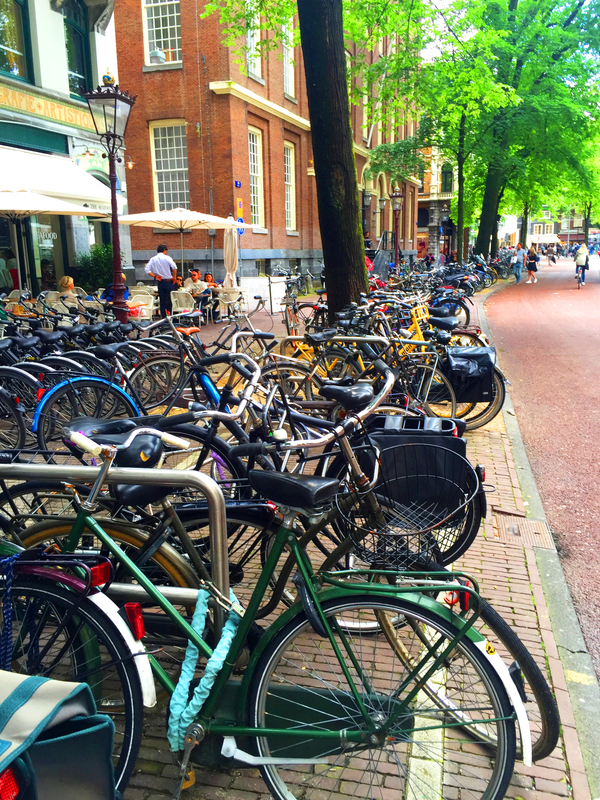 Outside, the danger comes from the silent, two-wheeled missiles that seemingly come from nowhere just as you happen to stray into a bike lane. We have bike lanes in the US of course, and our jolly Aussie mayor of Annapolis recently installed a temporary one on a whim down Main Street, even though traffic goes up. It saw sparse usage, and was hastily removed before the boat shows following protests from local merchants.

Unlike the well-marked bike lanes seen elsewhere, those in Amsterdam are often barely distinguishable from the walkways, and the sheer volume of cyclists dictates that it is they that own the space, and pedestrians are unwelcome. Anyone who has witnessed the phenomenon of the morning two-wheeled rush hour in Amsterdam will attest to the fact that it resembles a flock of starlings, not solely due to sheer numbers, but also to the swift and unpredictable changes of direction, and, yes, the silence. No racing machines or snazzy spandex outfits here, just typical Amsterdamers in off-to-the-office gear riding sit-up-and-beg bikes in varying states of repair, and woe betide anyone on foot straying into the way of that lot!

That’s all history now, and time marches on towards a welcome break for Thanksgiving. And talking of time, I’ll sign off with one last memory of Amsterdam, or of Schiphol airport to be precise. If you envision an airport clock to be one of the most boring and unimaginative things around, think again: https://www.youtube.com/watch?v=EAax4BSKNQU