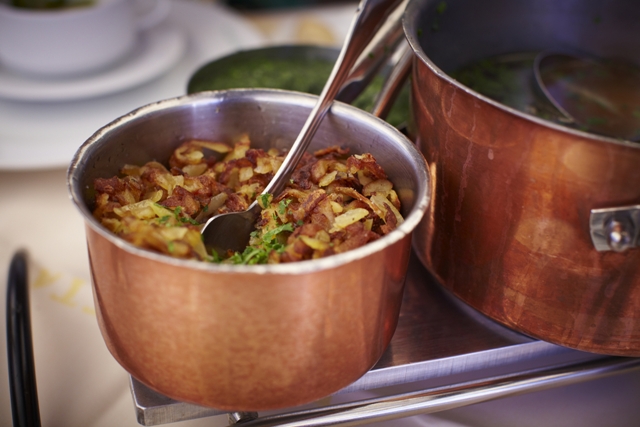 In my kitchen at home we use cooking pots and pans made from a variety of metals, and I thought it would be an interesting project to delve into the pros and cons of each material and then go on to see how that works with refrigerator evaporators.

After all, cooking pots and fridge evaporators both utilize metal surfaces to transfer heat, so many similarities exist.

When cooking on the stove, we're conducting heat from an external source (the burners), through the material of the pot or pan to the contents in the interior.

Simple enough you'd think, but different metals have different characteristics, and work in different ways. The ability of a material to transfer heat is known as its Thermal Conductivity. This is quoted in various units, but here we'll use good old fashioned BTU's per hour per foot per degree Fahrenheit (Btu/hr-ft-F).

Listed below are some of the common metals used for cooking pots and pans together with their Thermal Conductivity rating, starting with the most conductive and ending with the least. Basically, the higher the number, the more heat the material will conduct through it

Copper - 231 - My kitchen sports a sizeable collection of copper pots and pans, and these are used more than any other type. They need occasional polishing, and periodic re-plating when the interior coating wears away, but they react quickly to changes of heat levels, are wonderful to cook with, and produce very even heat, including up the sides. Plus they look so bright and pretty hanging on their hooks .... if they've recently been polished, that is.

Aluminum - 136 - Aluminum is middle of the road as far as thermal conductivity goes, but cheap and cheerful and pretty good for general purpose cooking.

Cast Iron - 46 - I love my gnarly black cast iron skillet! It has quite low thermal conductivity, but when it has finally warmed up (it takes some time), the heat is very even over the whole of the surface, and it can go from the burner to the oven without any ill effects. The downside is that it is mighty heavy and cumbersome ... and gnarly.

Stainless Steel - 8 - Oh dear, only 8! So stainless steel is a terrible conductor of heat. The numbers show that it has 29 times less thermal conductivity than copper, and 17 times less than aluminum. So in order to prevent localized hot spots that would otherwise occur, and to ensure uniform heat over the a stainless steel pot or pan, a layer of another metal, typically copper or aluminum, is added to the bottom to spread the heat. Without this feature, we'd be cooking omelettes that were perfectly done in some places, but burnt in others. Also, with practically no heat travelling up the sides of a stainless steel pot, it is transferred almost entirely only through the bottom, so large volumes of liquid get less heat than if it were a copper or aluminum pot. On a positive note, stainless steel is bright and shiny and as tough as nails, and so is in widespread use for cooking utensils.

Now let's move from boiling liquids on the stove, to boiling refrigerants in refrigerator evaporators.

Yes, you read this correctly, that is indeed boiling refrigerant you can hear flowing through the channels or tubes in your fridge's evaporator (evaporating = boiling, get it?). But this refrigerant is boiling at a very low temperature, typically around -5 degrees F, and sucking heat away from the fridge in the process.

At some point, this heat will have to traverse through whatever metal the tubes or channels of the evaporator are made of in order to get to the boiling refrigerant, and obviously if we want the most efficient refrigeration system, we should use an evaporator made of a material that can transfer the most heat.

Copper would be the first choice, but would be very expensive and has many drawbacks, so that leaves aluminum as second best. And aluminum is indeed the material used for the thin flat-plate (roll-bond) evaporators Frigoboat and a few others offer, being very efficient at transferring heat, although somewhat fragile and vulnerable to physical damage. These aluminum evaporators require an enamel paint job to prevent corrosion, and that gives them a bright and somewhat pleasing appearance.

There are some marine refrigeration manufacturers offering box/tank style evaporators and holding plates made from stainless steel. While being bright and shiny, and very durable, they do a pretty poor job of efficiently transferring heat from the air to the refrigerant. Not only is the lousy thermal conductivity of stainless steel a big factor, but the physical make-up and construction of these types of evaporators also plays a big role.
Unlike the aluminum flat-plate evaporators where there is just a thin wall of painted aluminum between air and refrigerant, the stainless steel variety are sealed enclosures or tanks that contain a serpent of tubing surrounded by a liquid or paste. With this type of construction, the heat now has to transit from the air through the stainless steel, then through the liquid or paste, then through the walls of the tubing to the refrigerant. That's three stages of heat transfer compared to just one with the aluminum evaporators, so it's no wonder that stainless steel evaporators are so comparatively inefficient.

Now wouldn't it be nice if we could combine the efficiency of the aluminum evaporators with the toughness of stainless steel? Well, the good folks at Frigoboat have done just that.

There are two models of thin flat evaporator, the 180F-SS and the monster 380F-SS, that have a stainless steel panel bonded to the front side of an aluminum evaporator. This keeps the rear aluminum surface as an efficient heat transfer platform, while the stainless steel front will withstand serious beer can and ice pick abuse, and look pretty spiffy every time you reach in for a cold one.

OK, so you lose some efficiency in order to gain durability, so subsequently these evaporators are rated for smaller applications than if they were all-aluminum. Frigoboat hybrid evaporators are best suited for fridge applications, where efficient heat transfer is not as big a factor as in a freezer, and where potentially damaging packaging, i.e. metal and glass, are more likely to be encountered. Freezers typically contain items packaged in more forgiving materials, like plastic and cardboard, and it's here where the need for efficient heat removal outweighs the need for armor plating.

Both hybrid models are bendable, like the all-aluminum versions, but you'll need a pretty sturdy jig to do it, and having a brawny assistant handy would be highly advisable. And remember: Measure twice, bend once. There is no "bend twice" option .....