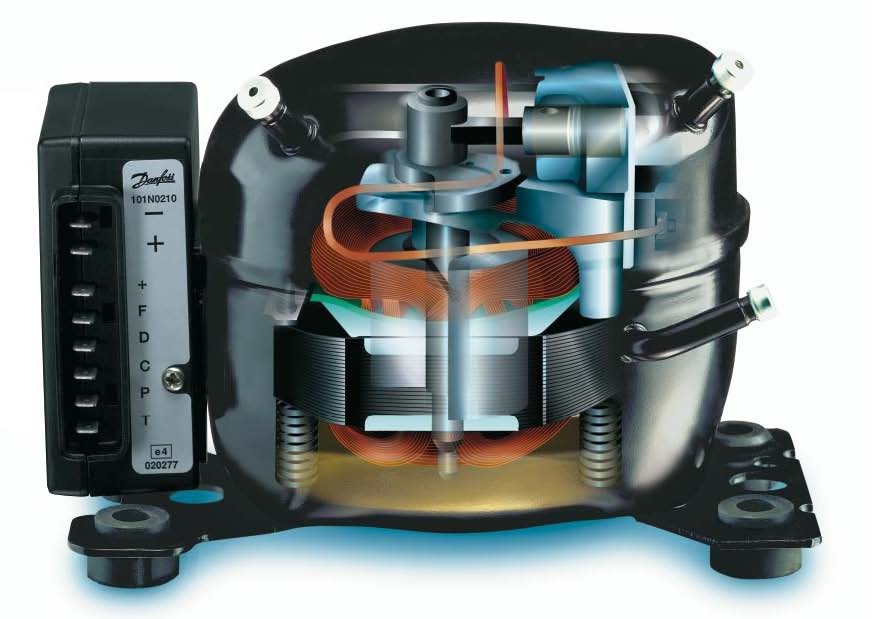 Most marine refrigeration, and all Frigoboat systems, use the Danfoss BD 35 and BD 50 compressors which are incredibly reliable machines and very robust. It takes a lot of abuse to "kill" one (they don't simply die from natural causes), so if you suspect that your compressor is faulty, it's important to know how these compressors work, how they can be damaged, and what symptoms to look for.

The Danfoss BD 35 and BD 50 compressors are identical except that the BD 50 has a little more cubic capacity and therefore a slightly higher Btu rating. The compressor and motor are hermetically sealed inside a steel canister and supported on vibration-absorbing springs. There is no shaft seal that could leak refrigerant.

COMPRESSOR – The compressor is a single-cylinder device with a crankshaft that when rotated pushes a piston in and out of a cylinder, compressing the gas. A simple valve plate allows gas to be drawn in on the down-stroke, and the gas to be compressed and then released on the up-stroke. The compressor assembly is mounted above the motor, and the vertical crankshaft is a continuation of the motor shaft.

ELECTRONIC COMPRESSOR CONTROLLER – Also known as a "module", this is a vital part of the compressor, and the motor cannot run without it. The controller is mounted on the compressor on a special bracket, and secured with a screw. It is electrically connected to the motor via a three-wire plug that is pushed on to the three-pin connector on the compressor shell. The compressor controller basically takes the 12v or 24v DC input and energizes each of the three windings in turn, causing the motor shaft to rotate. Varying the speed at which the windings are energized varies the speed of rotation of the shaft.

COMPRESSOR – Oil is carried around the system by the refrigerant, so there is constant lubrication of bearings, etc. and the possibility of a mechanical failure is practically non-existent.

The valve plate can easily be damaged by overcharging a system with refrigerant to such an extent that liquid refrigerant is allowed to enter the cylinder. Refrigeration compressors are designed to compress gas only, not liquids, and the introduction of any liquids i.e. water, excess oil, leak detecting fluids, "conditioners" etc. into the cylinder will inevitably lead to valve plate failure. This condition will result in poor differential pressures (discharge-suction), again evidenced with the use of refrigeration gages.

MOTOR – As with the compressor, the bearings are well lubricated by oil carried around the system by the refrigerant, so mechanical failure is highly unlikely. If the motor is not turning, it is almost certain that the electronic controller is preventing it from running for some reason (see below).

The motor windings can be tested for continuity with a simple multi-meter at the three-pin connector. All three windings should be the same value, approx. 1.5 - 3 ohms, and there should be no continuity from any of the windings to the shell of the compressor.

ELECTRONIC MOTOR CONTROLLER – Being an electronic item, there is a high risk from failure due to water damage, lightning, power supply anomalies, and other causes. By far the greatest number of problems reported have been traced to the power supply to the controller.

The controller has the provision for a 12v diagnostic LED to be connected across the "D" and "+" terminals. The LED will flash a code if one of five fault conditions exists that will prevent the compressor from operating. The code is either one to five flashes dependent on the nature of the fault, as listed below. Each flashing error code cycle is repeated every 4 seconds. When a fault is detected, the compressor will stop (if already running) but the fan or water pump, if applicable, will continue to run. A re-start will be attempted approximately every 60-90 seconds. The fan or water pump will stop during restart attempts.

• One Flash – Indicates low voltage. Voltage at the incoming power terminals on the Danfoss controller has dropped to less than 10.4v (22.8v). Voltage must rise above the cut-in voltage of 11.7v (24.2v) before the compressor will attempt a re-start.

NOTE: If the initial power applied at start-up is less than 11.8v (24.3v), there will be no fault code flashing on the diagnostic LED, but the compressor will not attempt to start until the voltage has risen above 11.7v (24.3v). Under this condition, if a digital thermostat is installed (e.g. Guardian or Coastal MK II Thermostat), the digital display will be lit and showing normal information.

• Three Flashes – Indicates that the compressor cannot start due to too high a differential pressure in the compressor. This is a common problem where poor voltage, or breaks in the power supply or thermostat wiring cause the controller to attempt a compressor re-start too soon after it has been stopped for some reason. It can also be caused by a refrigerant over-charge.

• Five Flashes – Indicates that the electronics heat sink has exceeded 212 deg F (100 deg C). This can be due to an overcharge of refrigerant, water in the system, or excessive ambient temperatures combined with a compressor operating under extreme load. A re-start will be attempted when heat sink has cooled to 170 deg F (80 deg C).