What's so Special about this Battery? 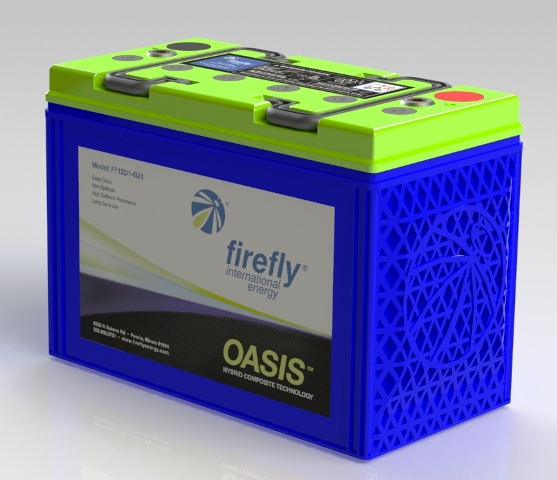 What's so special about this pesky Firefly Oasis battery that I'm tripping over everywhere I go?

The word seems to be out about the Firefly Oasis battery. So much so, in fact, that we seem incapable of keeping them in stock, and the manufacturer is so swamped that they can’t produce enough of them!

What is it about this battery that has stirred up so much interest? Maybe it has the same sort of allure that the Ford Model T did back in the day. With a choice of just one size, it can be ordered in any color as long as it’s a rather fetching green and blue, something that wouldn’t look out of place on the mantelpiece at Christmas.

Or maybe some folk are keeping them as pets, showing them off to fellow boaters in between feeding them freshly charged volts and cleaning up their discharge.  No, there must be more to it ….

It’s a Group 31 AGM battery - Nothing ground-breaking there. It’s a  VRLA (Valve Regulated Lead Acid), AGM (Absorbed Glass Mat), PSOC (Partial State Of Charge) battery, for all you AL’s (acronym lovers) out there. It’s a nominal 12 volt battery containing lead and acid and is no lightweight, weighing in at 75 pounds. It has comparable capacity to other Group 31 batteries and has similar charging requirements. No super-acidic acid; no extra heavy lead; no kryptonite or unobtainium. Pretty boring so far, so what’s the big deal?

Foam sweet foam - That is the big, big deal. Such a big deal in fact that Firefly have a patent on it. Instead of traditional all-lead negative plates, the Firefly battery incorporates a foam-like structure made of carbon.

Think of it like the sponge you use in the shower (many boaters do shower, I hear), only a heck of a lot less grungy and made of carbon.

All that massive surface area in the walls of the foam sponge’s bubbles means far more contact area with the acid in the battery than can be achieved with regular all-lead plates.

Imagine how much acid you could squeeze out of a sponge compared to a lump of lead, and no, please do not try that at home! All that additional acid-to-plate contact area manifests itself in several highly beneficial and unique features that puts the Firefly battery way ahead of conventional AGM’s, and on its way to approaching lithium ion performance.

If, after reading the above, you feel compelled to join the blue-green revolution, I’d suggest not deliberating too long. There are minimal lead times at present, but there is a price increase in the works, and that will no doubt generate advance orders that will put some pressure on the supply chain. Just sayin’ …..